Software has long been a weak point in African publishing. Indeed, the high price of proprietary programs like InDesign and the resulting piracy have led to a scenario characterized by a lack of standards and reduced competitiveness. Within this context, many local actors see free software as an extremely attractive option. On this occasion, we talked to Bako Malam Abdou, a programmer, publisher and designer who graduated from Niamey University (Niger). Bako has wide-ranging experience of working with educational books –having coordinated the publication of almost 400 titles– and now runs his own publishing company, by the name of Gashingo. As he suggests, the diffusion of free software could give a considerable boost to publishing and education in Africa.

1) Which desktop publishing programs are currently used in Niger and in the region? Do you think they are suitable?

In the vast majority of cases, we are talking about QuarkXpress, PageMaker, Publisher, Indesign, Illustrator, Photoshop, Paint, all proprietary programs, which are very often pirated copies. In my opinion, the continued use of pirated proprietary programs could be compared to the situation of someone who can’t swim and who keeps wading out to sea without knowing how deep the water is. I think everyone should be familiar with the rights protecting intellectual property and their limits. I am aware that the day the developers of these programs decide to go after everyone involved in piracy, the consequences will reach far beyond the mere closure of the infringing company … 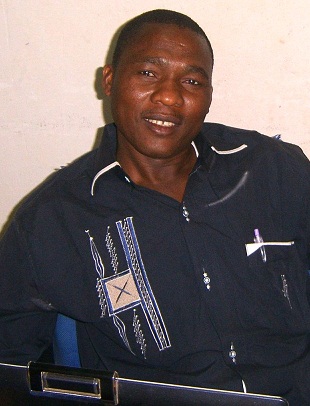 Now, in the case of the few organizations that pay for their programs, there is a problem of compatibility with small-scale clients and providers –who make up most of the market–, since they won’t have the same version of the software, but more likely an earlier one. Perpetual updates and payments can lead them into economic difficulties –or simply to using unauthorized software, just like their colleagues.

2) In this context, could free software have a significant role to play?

The use of free software in companies like publishing houses is essential to their development, for various reasons:

It is true that old habits die hard. In this regard it isn’t easy to get everyone to change at the same time. While some people accept change spontaneously, in other cases it will require a long and intensive awareness campaign. In short, I would say that free software offers undeniable advantages in the field of publishing. Consequently, its dissemination will make a great contribution to this sector, to information and to education in Africa in general, since it will constitute an important step in the fight against illiteracy.

3) Which free programs do you use in your day-to-day work?

I work on a daily basis with Scribus for layout tasks, Gimp and Inkscape for image treatment, Fontforge for creating fonts in African languages, LibreOffice for dealing with texts/tables/equations (particularly for maths books). In Niger, the publishing companies that use these programs full time are Gashingo and BucoEdit. There are other publishers in the region that also work with them, in Benin, Burkina Faso, Mali and Cameroon. Our project aims to extend and improve training on free software in other countries, such as Ivory Coast, Togo, Senegal, Chad, Guinea, Nigeria and the countries of the Great Lakes Region.

4) Training is essential then in this field. You have participated in numerous training workshops on digital topics, organized mainly by the International Organisation of La Francophonie (OIF). What have these initiatives involved?

In the framework of free software, the OIF has provided us with many and varied opportunities. Indeed, we have had the chance to use free layout programs and then participate in international meetings that bring together the developers and users of these programs, for example:

Thanks to all these experiences, the OIF has enabled me to develop my technical and pedagogical competences and become an instructor along with other professionals from West Africa. I was in charge of the second training course on infographics in October 2011, a training course in Yaoundé and another in Cotonou in May 2012 under the supervision of Cédric Gémy (the instructor who has taught most of the training courses organized by the OIF) and Amadou Waziri (head of the OIF training department).

5) Earlier you mentioned Fontforge for the treatment of African fonts. What are the specificities of African languages in general and those from Niger in particular, with regard to digital writing?

We publish in many cross-border African Languages and in all of our 10 Nigerien languages. Each language has its specificities when it comes to writing, to the extent that Latin Characters are not always sufficient. In addition, there are other languages, like Tamajaq, which have their own writing system (Tifighar) and need different fonts. We have even tried to offer some solutions to this problem, but there still remains a lot to be done to provide these African languages with more suitable free fonts.

6) Have you ever explored the production and distribution of e-books? Do you feel that electronic books represent an opportunity for sub-Saharan Africa?

I think the word “explore” is very apt for describing my experience with e-books. However, during the Tunis training course we spent half a day working with Calibre for e-publishing. The next session of advanced training for African instructors on free software for publishing will take place in Ouagadougou from the 23rdto the 28th of July, also thanks to the support of the OIF; the aim is to promote the creation of e-books with the aid of numerous free programs. In my opinion, e-books will be highly beneficial and welcome. Nonetheless, a lot still remains to be done, given that access to the digital age is not guaranteed for all the population. We are currently witnessing an intense exploration of mobile phone technology in both urban and rural areas, so if e-books were to reach all mobile phone users, I am sure we would make great strides towards achieving our objectives.

7) What concrete recommendations would you give to other publishers and designers from developing countries that are facing similar challenges to the ones you have described?

As I explained earlier, our objective is to keep providing awareness and training for other publishers and designers in the aforementioned countries. What would be required would be for awareness to gain ground among policymakers –that is, at the highest levels of state–, in order for the use of free software to be made public and for people to develop a deeper interest in it. We would need state institutions, such as the Official Gazette, the government IT Department, schools, ministries and cybercafés to use free programs for their daily tasks.