HomeFeaturedThe Aakash and the future of electronic publishing in India. Interview with Vinutha Mallya

The Aakash and the future of electronic publishing in India. Interview with Vinutha Mallya

On the 11th of November, 2012, India presented version 2 of its Aakash tablet. The device comes with a 1 GHz processor, 512 MB of RAM and a 7-inch screen. One of the most striking things about the Aakash is its reduced cost: the Indian state will pay 41 dollars for each appliance, while students will be able to get one at the (subsidized) price of 21 dollars. The scale of production promises to be huge: at least 220 million tablets will be turned out over the next 5 years. Despite the difficulties faced by the first version, the Aakash will no doubt become an essential digital reading platform in developing countries. To discuss and delve into these topics, we talked to Vinutha Mallya. Vinutha is currently Consulting Editor to Mapin Publishing, and a Contributing Editor to Publishing Perspectives. She also serves as a visiting faculty member to India’s National Book Trust’s publishing course, and as an advisor to the annual Publishing Next conference.

1) The Indian government recently launched the latest model of the Aakash-2, and the figures are astonishing (220 million tablets in the next 5 years). What are the advantages of the project, in your opinion?

It is undoubtedly an ambitious project. If implemented well, it has the potential to revolutionize the delivery of educational content in the country. It would also give access to digital natives (and there are many inIndia) and lead to their participation in the production and consumption of technology-driven content.

2) What about the challenges?

There are many challenges, especially to government-initiated projects of this scale. Apart from the deep-rooted corruption that gets in the way of effective project implementation, many of these tech-heavy projects are personality-driven. So, if the person who started it is out of office, the project is liable to crumble. 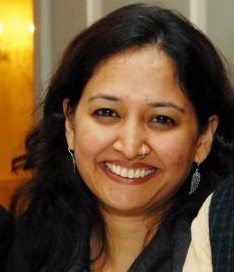 But we have precedence to guide us: the C-DOT project, which brought telecommunications across India in a short time, since it was established in 1984. Telephones reached almost every village within a decade. It is the groundwork of C-DOT that all present ICT4D projects have benefitted from in the country.

With regard to the device itself: it remains to be seen how many of the technology and battery problems spotted in Aakash-1 have been resolved in Aakash-2.

Most importantly, since its primary use is for classroom learning activities, the technology-driven pedagogical approach will determine its success. Now, this is a challenge, since basic connectivity to higher education in non-urban areas remains a dream: right from the presence of institutions, to transport links, to internet hubs, to teachers who are tech-savvy. Aakash-2 seems to be aware of this and has begun by using the device to train teachers of engineering colleges.

My bigger worry would be that students from science and technology disciplines will get priority over arts and humanities students, as in the case of all educational resources in India, and by the time the device trickles down to them, we will have lost a lot of time.

Coming to the most important challenge: device readiness for content in Indian-languages. I am not sure yet how prepared the device is to host language content. But we should wait for it to be reviewed from this standpoint.

You’ll find many Indians in the education and content development space quite skeptical whenever the government launches such glamorous initiatives, because almost always implementation will be challenging. Techies might review it for its tech qualities, but its real test will lie in how much and how soon it will reach the intended audience.

It is important to remember that in the case of Aakash, the government is not directly involved. It has given this responsibility to a national autonomous institution—first IIT Rajasthan and now IIT Mumbai. Datawind is the company that will sub-contract the manufacturing of the devices.

3) With its advantages and drawbacks, the Aakash is without doubt a big leap forward in terms of spreading digital reading. Do you think Indian publishers are making an effort to keep up with the electronic age? What would be your advice to them?

Indian publishers want to make an effort; there is no doubt about it. They see the value in the new means for content delivery, and they are also fully aware of its market potential. Keeping up with the electronic age is challenging because of the investments needed by smaller publishers to “go digital”. Not only does it seem confusing, but the convergence of media and rapid changes make it difficult for them to grasp and discern what needs to be done.

Publishers here will invariably follow the trends set by the multinational companies whose Indian subsidiaries will have access to the technology developed in the West, and will implement it here. My observation is that the process of thinking “ground-up” is missing. The digital pathway is becoming imitative rather than innovative.

My advice would be to create solutions for local realities, keeping in mind the geographical and cultural diversity. But first they should educate themselves and make themselves aware of the options available to them. For example, an expensive software solution may not be the answer, while a simple XML enabled design file is all that is needed to achieve basic entryway into the digital world. They should also understand the relationship between the devices available and the content and what kind of content works best with what sort of device.

4) Many big international players such as Amazon have been making their own incursions into India in recent months. However, last September, the Indian government established some regulations regarding foreign online companies. What happened exactly? Do you think this might become an obstacle for those global players?

Technically speaking, the Indian government did not establish strict regulations now. The retail sector in India had been closed to any foreign direct investment until the government liberalized the sector in September. The Indian retail brands that have been established by big Indian corporations were a powerful lobby in making this happen. Amazon and Walmart have also been trying their best to lobby for deregulation of these laws.

Perhaps it is because of the stiff opposition from many quarters that the Government has allowed just a percentage of investment from foreign companies for multi-brand retail only. So, now the foreign investors who want to engage in multi-brand retail, such as Walmart and Amazon would need to enter into a joint venture with an Indian partner. Walmart has done this with Bharti. Amazon does not seem to want to join hands with anybody. This, plus the rule that such entities cannot engage in e-commerce, completely kills Amazon’s chances of setting up business, because e-commerce is their business model. It is certain that the government will deregulate over the coming years. But, for now, Amazon cannot establish itself in India. It will have to continue supporting Junglee, which is an online aggregator, but not a direct seller.

Whether this is an obstacle depends on the point of view. I believe that such large-scale changes are best made in phases, keeping the country’s health in mind, instead of under pressure from powerful lobbies. So, I would prefer global players to be inconvenienced, if it means that the Indian public gets the chance to adapt to these changes. The Bharti-Walmart JV company is already under the scanner for alleged violations of the FDI norms.

5) India has become a global software hub. But apart from providing IT services, one would normally expect India to become an international power in terms of content, hardware and other aspects of the digital publishing ecosystem. What is your impression of this? What place should India aspire to occupy in the long term?

The unfortunate reality is that, although India is known for IT and IT-Enabled Services, it is not known as a content producer. We are still importing a lot of our content (I mean in the English language of course), and as such we are looked at by foreign publishers as a market of consumers, not producers. India would need to produce good quality content that can find a market internationally, for it to hope for a place in the global digital-publishing ecosystem.